Do you ever have the experience that no matter what you do, nothing seems to be improving and you get this feeling that you are stuck?

Whether it is with the level of success we have in our business or progress towards a goal, feeling stuck is not a pleasant experience.

Not too long along, I was in such a situation. I had decided to write a series of books around the topics of team performance, coaching and leadership and was making slow progress with my writing. It really felt like I was stuck no matter what I tried to do.

Even when I wrote part of a chapter, I would re-read what I had already written and make a lot of corrections, and I would end up deleting almost the same amount of words I had just written. This seemed to go on for weeks, if not a few months, until I figured out how to turn it around. 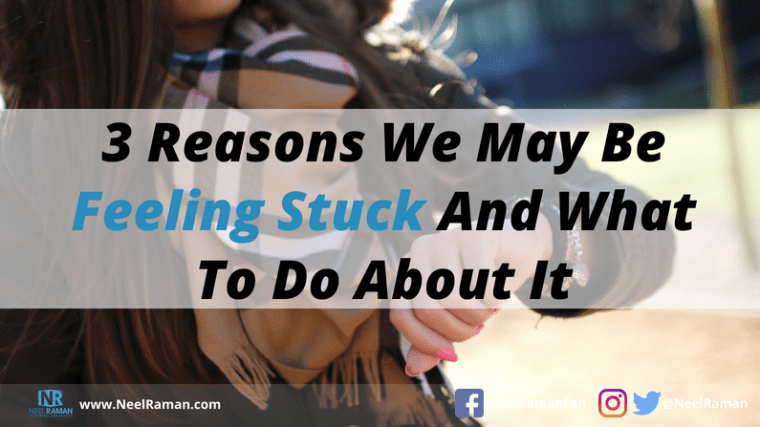 Before explaining what could be done in similar situations, it is important to explore this concept of feeling stuck. Whenever we feel stuck, what we are really saying is we are creating the same reality over and over again.

In other words, our experience in the outer world is not changing even though we feel like we are working hard towards something. Whenever we feel stuck, it is also very common to feel overwhelmed as well.

Here are three reasons why we may be feeling stuck and some simple action steps to move past it so that we can start creating the outcomes we want or have the experiences we’d like to.

The action steps mentioned below are what I did to be able to get myself out of feeling stuck and complete writing three books in my Leader’s Guide series within 18 months.

Action step to overcome this: Take new actions or take a different approach. One new action could simply be asking for help. The key here is to get into action quickly and start getting different results.

Regular reviews can also help. If after a period of time, you aren’t where you expected to be, evaluate what’s working, what’s not working and what you can start doing differently.

It is not uncommon to feel stuck however there are valid reasons for it. Once we’re able to recognize what those reasons are, we’ll be more empowered to take the appropriate actions to get ourselves back into momentum again. And most of the time, it only takes something simple to get ourselves out of that state and start feeling great again.

Question: What are some other steps that can be taken to overcome feeling stuck?