Conflicts are inevitable whenever we have to deal with other people for extended periods of time. Sometimes issues arise which can catch us by surprise.

If we know how to respond to issues or conflicts, we’ll be in a much better position to affect the situation the way we want, while ensuring those involved achieve their outcomes as well.

The Risks of Not Resolving Conflicts

As dealing with conflicts can be uncomfortable or challenging, if left unresolved, we may experience:

Whenever we’re interacting with people who have different beliefs, values, opinions or behaviours, chances are at some point we’ll experience disagreements and conflicts. Therefore, knowing how to deal with conflicts is a useful skill to have. 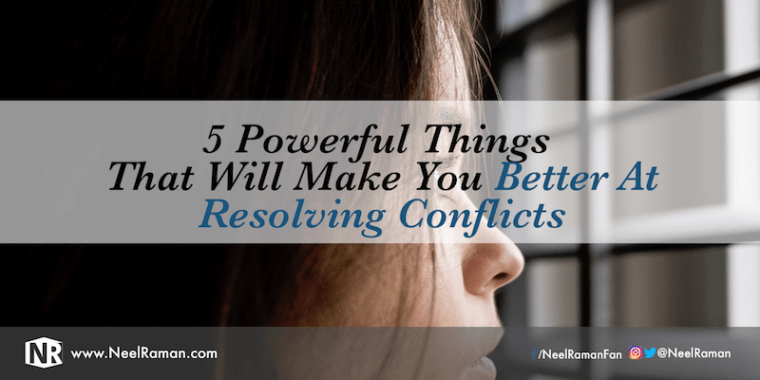 I remember once having a conflict with a team member, who I had worked with for over four years. During a normal work-related conversation, she suddenly became abrupt and snapped at me after I had asked her a question. Initially, I was taken back so I decided to walk away from the conversation as I observed she was under a lot of stress to meet certain deadlines.

I chose not to raise the issue that day so the next time I saw her, which was a couple of days later, I approached her and asked if we could talk. She agreed to have a discussion later in the day, which gave me an opportunity to prepare for the conversation I wanted to have with her.

At the start of our conversation, I went through the steps outlined below and also apologised for adding to the stress she was feeling at that time. The conversation went well and we were able to acknowledge how that situation could have been handled better and how we could move forward. I never had an issue with that team member again and we were able to work well together when we needed to.

Sometimes, conflicts can make a relationship better, therefore it’s a huge advantage to know what to do to resolve them quickly.

5 Things to do to Resolve Conflicts Better

Being willing to resolve conflict takes courage and sometimes, a willingness to accept we made mistakes or did things wrong. If we’re able to focus on the benefits when we resolve the conflict, then it’ll be a lot easier to do the things necessary to reach a resolution.

Action Step: If you’ve had a conflict with someone recently, start off by first taking yourself out and observing your part in it. Then start apply the rest of the ideas suggested above so that you can reach a resolution faster.

Question: What is something else we should be aware of when resolving conflicts?