Our ability to influence people determines how much of an impact we can make.

If we want to make a bigger impact in the world, we have to become better at influencing other people. The dictionary defines influence as “the capacity or power of persons or things to be a compelling force on or produce effects on the actions, behaviour and opinions of others.”

When done correctly, a person who has been influenced to take a particular action, should feel they’re taking that action because they want to, and not because they were forced or manipulated into doing it.

Some of the benefits of becoming a more influential person includes:

Having strong influence skills can make a huge difference in our lives. On the other hand, if we make common influence mistakes, it’ll be challenging to achieve what we want, which will also affect others getting what they want. 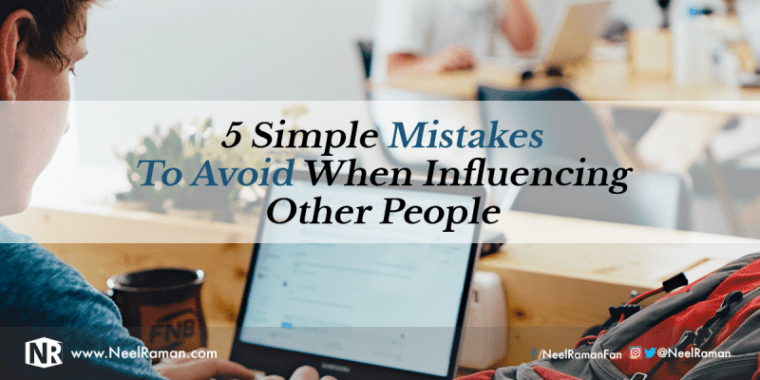 When I was fresh out of university and had a career in manufacturing, I had a manager who always wanted things to go his way and had to win at all costs. I remember once we had back-to-back meetings with two competing suppliers, where the focus of those meetings were on price negotiations.

The meeting with the first supplier went as we thought it would, where the supplier offered a rebate based on volume, meaning that if our company would buy a certain amount of product every month, we would be given a price credit as part of the deal.

During the second meeting, we knew this supplier provided a better quality product, which helped with machine efficiencies and reduced the amount of waste produced. However, their price was higher and over the course of a year, based on the volume of product we used, that would amount to a few hundred thousand dollars extra in raw material costs.

Naturally, we wanted to save money on raw material costs and even though the supplier tried to justify the price by identifying the benefits we would have from using their product, my manager wasn’t interested and basically said that if they could not give us a better price, we would buy all our product from the other supplier, who had offered us a better price.

The meeting ended with the supplier agreeing to review their prices and set up a follow-up meeting. My manager’s manager, the Managing Director of the company, had to get involved in the negotiations because both suppliers had regional deals, as our company had sites in different states and also different countries in the region.

The Managing Director had to coach my manager on how to have a win-win situation for everyone involved during negotiations. The end outcome was our company agreed to continue using both suppliers at prices acceptable to all companies.

The lesson I learned from witnessing the negotiations was that if one party wants everything to go their way without considering different options or seeing things from different perspectives, it’s highly unlikely a negotiation or influence situation will end with everyone being satisfied with the outcome.

5 Mistakes to Avoid When Influencing Others

Things You Can Do to Become a More Influential Person

Some simple things we can do during influence situations include:

Action Step: During your next influence situation, spend as much time as you can preparing for it. Review the mistakes identified and have options ready to deal with whatever may come up so that you can reach the outcomes you want and guide others to the outcomes they want.

Question: What is another mistake we must avoid when influencing others?