Speaking in public brings up a lot of anxiety, nervousness and fear for many people.

When I started public speaking it was very challenging for me. Being an introvert, I often struggled to speak in group settings let alone speak in front of an audience.

To do the work I’m doing now, which is speaking, training and coaching, I knew I had to learn more about public speaking and develop the confidence to speak to audiences of any size. 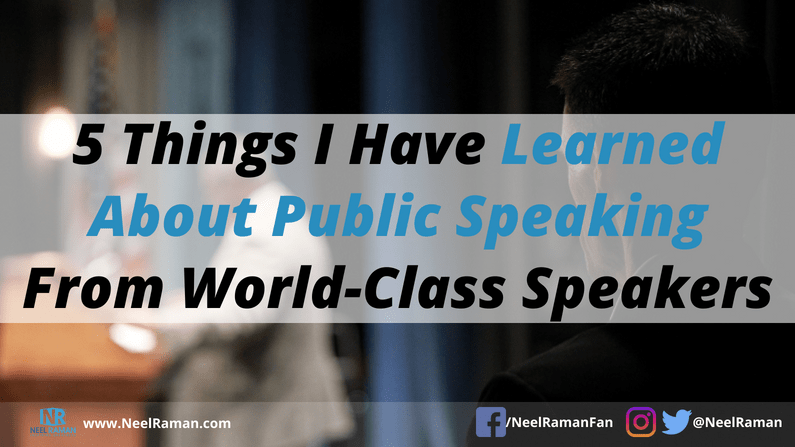 how to become a better speaker

The first thing I did to get better at public speaking was to enrol in a Toastmasters course. I found it so challenging that I didn’t even finish the course. I made up the excuse I was too busy to go to classes after work in the evenings.

Luckily, I had enough sense to persist with it and over the years, through attending different workshops, seminars and training programs, I put myself in situations where I was forced to speak in groups or in front of audiences.

With time, I’ve gotten better at public speaking and to date, the largest audience I have ever spoken in front of is 1,400. While I still have a lot to learn about speaking, there are many things I have learned with has helped me get better whenever I’m in front of an audience.

Here are five things I have learned about public speaking from the many world class speakers I’ve spent timed with. Anyone who can apply these things will be on their way to being a better, more confident and impactful speaker.

These are things I’ve learned over the years from world class speakers that has helped me improve my speaking skills and confidence.

While there are many more things to take into consideration when you’re in front of an audience, these are fundamental things that apply every single time when speaking. Once you apply these, you’ll notice a vast improvement in your speaking ability.

Question: What are other things that can help someone with public speaking?