7 Toxic People You Should Avoid All the Time

In a perfect world, the people around us and those we spend most of our time with, would be encouraging, supportive and positive people.

However, we know that’s not the case.

Negative or toxic people are all around us. They could be people we live with, people we work with, our family or relatives, acquaintances or people we know socially.

Being around toxic people can:

These people can be deadly, if we allow them to be, and should be avoided whenever possible. 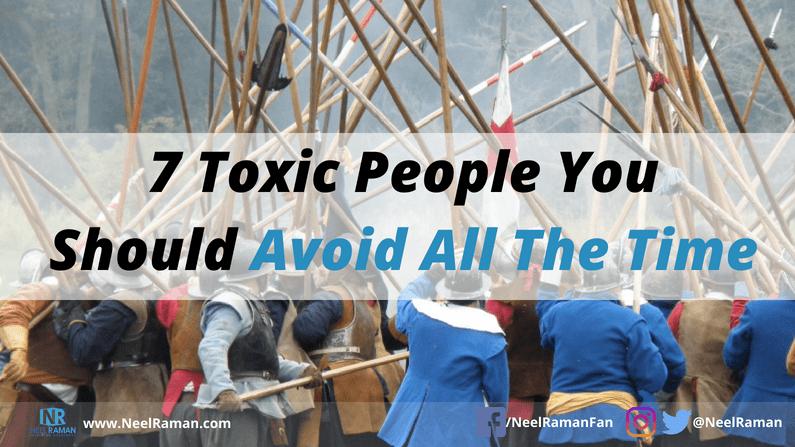 Many years ago, when I first evaluated whether the people in my life were positive or negative, it came out to be roughly 50/50 — half were predominantly positive and half were negative most of the time. At that time, I decided to eliminate or avoid those I considered negative and added new positive people into my life.

Thankfully, almost all the people in my life are generally positive, although we all have our moments when we get plugged into negativity. The key, however, is to be aware when we’re in such situations and turn it around quickly.

The late Jim Rohn, had a famous quote, “We are the average of the five people we spend the most time with.” Therefore, we must deliberately choose who we want to associate with as they affect so much of our lives.

7 Toxic People to Avoid All the Time

Here are seven types of toxic people we should avoid at all costs. It’s important to recognise that this isn’t about judging others. It’s about taking responsibility for who we want to spend our time with and who we want to avoid.

If we have toxic people in our lives, what can we do?

One of my mentors says if they’re family or loved ones, we shouldn’t see them as often and we shouldn’t stay as long with them. Other options may be to cultivate new relationships or friendships that will automatically reduce our need to spend much time with these toxic people.

Question: What are other toxic people you should avoid all the time?