The movie, Field of Dreams, popularized the phrase “Build it and they will come.”

That concept worked really well for Kevin Costner’s character in the movie however, can it really work for you if you’re in business or for your marketing efforts?

Most entrepreneurs see themselves as big dreamers or even visionaries.

Consider the likes of Steve Jobs or Bill Gates. One thing they had in common was that they believed they could change the world with what they had to offer. And they did! 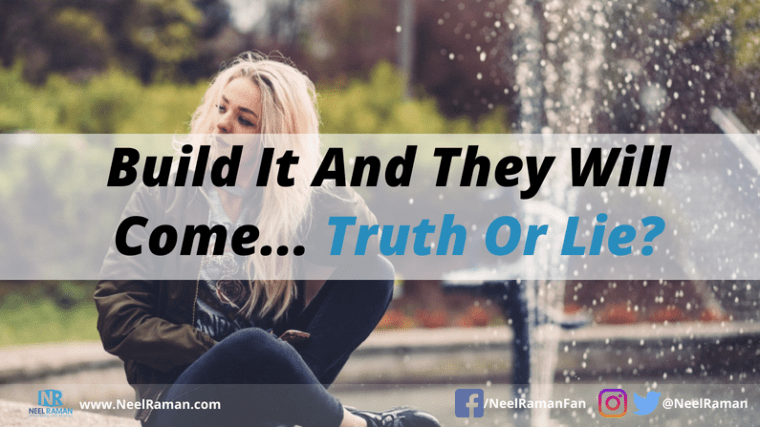 Here’s an example of where the concept of “Build it and they will come” has worked.

Apple has revolutionised many different markets such as music, computers, phones, and tablet computers/devices. Prior to 2006, smart devices weren’t a part of our daily lives. Apple introduced the iPhone then the iPad, which have worked exceptionally well for them.

Since the introduction of these two devices, the market has been flooded with smart devices from other manufacturers and now we’re addicted to our smart devices. One of the core drivers of Apple is to create products that their customers did not know they needed and once they have them, they cannot imagine their life without those products.

Desktop computers are another example. Since the 1970s, desktop computers have been an essential part of business operations before moving into homes. Bill Gates had a vision that every home in the world would have a computer and use software that his company produced. That also led to the creation of laptop computers and life has never been the same since then.

In the two examples above, what made those products succeed?

Jobs and Gates saw a need in the marketplace and created products to fill those needs. I’m not entirely sure whether they did any market research or surveyed their potential customers on whether what they had in mind would be what their customers wanted. But for them, “Build it and they will come” worked for them.

Let’s look at this from a different perspective.

One of the fundamental rules of marketing is to find out what your customer wants then give it to them. Most businesses struggle because they focus so much of their resources on activities that will not lead to something that their customers want. This leads to frustration, loss of revenue and in the worst case scenario, business failure.

Here are three simple ways to avoid the mistake of creating a product that no one wants.

I’ve given two different perspectives on this concept “Build it and they will come” which are used all the time. If you consider the movie industry, film makers are creating a product that they hope people will like and recommend to others. In other businesses, market research is a vital initial step before creating products.

My conclusion is both strategies will work, however it is dependent on your industry, the relationship you have with your customers and your track record. The key is to know what will work best for you and your business and apply the right strategy.

Question: Does the concept of “Build it and they will come” resonate with you? Why or why not?

4 thoughts on “Build It And They Will Come… Truth or Lie?”