How to Avoid Taking Things Personally

Learning to not take things personally can be very challenging because we’ve been conditioned from a young age to be influenced by external situations.

Taking things personally means an event or experience that didn’t go the way we expected it to, has caused us to feel some type of negative emotion, whether it’s sadness, disappointment, frustration, anger or lower motivation.

Why do we take things personally?

Some reasons why we take things personally include:

We’re all doing the best we can to live life. The danger of taking things personally is that we’re being influenced by external situations or things outside of ourselves. Instead of living from the inside out, we’re living from the outside in.

One of the most valuable things we can learn to have a higher level of self-awareness is to not take things personally, especially when things don’t go as planned. 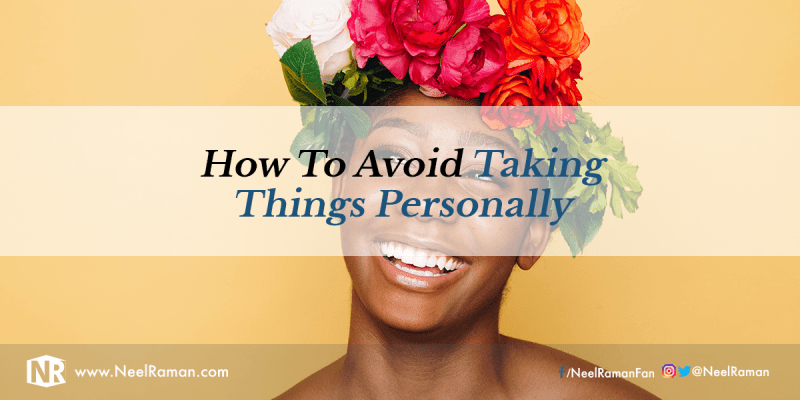 How to stop taking things personally

During my corporate career, when I was the Operations Manager for a manufacturing company, maintaining adequate levels of finished product for our key customers was one of my main responsibilities.

On one occasion, there had been a few equipment failures, which caused customer stock levels to fall dramatically. The company National Sales Manager, who was based at another site, had come to our site for a visit and was advised of the situation regarding customer stock levels.

I remember him coming into my office and yelling at me, wanting to know what was going on and why stock levels were so low. He went on for about two or three minutes before he stopped to give me a chance to respond.

The first thing I said in a calm manner was, “Are you done? Or was there anything else you need to say?”

I think that took him a little by surprise and I then told him what was being done to get the situation under control. The conversation ended with me asking him not to yell at me again and that someone in his role needed to present himself in a more professional manner.

Had I taken what he said personally, chances are I would have made the situation worse by getting angry or defending myself in an aggressive manner. There are always things we can do to not let events or experiences affect us.

How to Stop Taking Things Personally

When someone reacts in a way we don’t like, we don’t have to get even with them. If we can accept that people are doing the best they can with the awareness, knowledge, skills and resources they have available to them, then it’ll be a lot easier not to take things personally. If we do, we’ll give ourselves a much better chance of focusing on what’s important to us.

Action Step: Reflect on the last time an event or someone caused you to take something personally. Write what you learned from the experience and what you can do next time you’re in a similar situation.

Question: What is something else we can do to avoid taking things personally?