I recently heard from one of my mentors that if you have a dream that you can achieve on your own, then your dream is not big enough.

That is quite a profound statement because it emphasises the importance of having a team in the first place, and it also reinforces that if we have a team, then team members must be aligned, engaged, motivated and work towards a common objective.

When a team is not operating to its full potential, some of the consequences include: 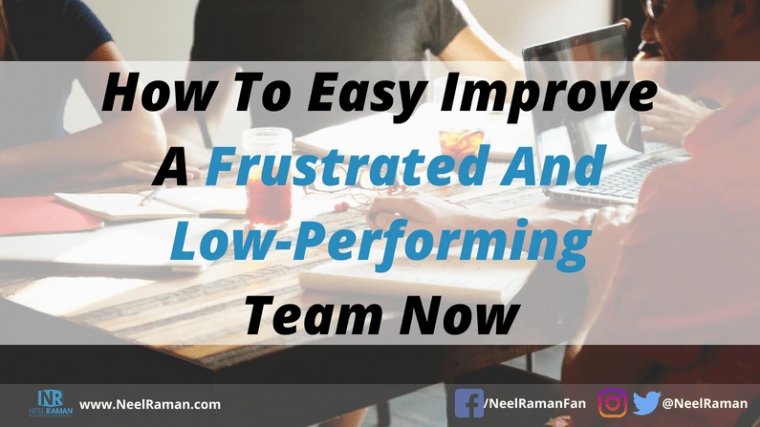 When a team is not performing well, continuing to do the same things will not help and can even lead to more serious consequences such as team members refusing to work with each other or even considering leaving the team.

While there may be a lot of things outside the control of the team and its leader when things are not going well, there are things the leader and team members can do to turn things around and get back to operating at a high standard again.

In one of my recent experiences as a training consultant, a team member needed to be trained up in a new role and in a new system. Prior to that team member taking up that role, a temporary employee had been in that role and was trained up by the line manager of the team. While that employee was in the role for only a couple of months, it became very evident that the training that was provided was ineffective or incomplete.

Not only did it cause frustration for the employee, it also caused frustration for the line manager and other team members because they could all see that things were not being done correctly and simple processes were not being followed or understood. I believe that it came down to the level of training that was provided so I raised the issue with the line manager and asked what type and quality of training was provided. My recommendation to the line manager was that the quality of training for the new team member had to be different and better than what had been provided to the temporary employee in order to get a better performance.

As the saying goes, “In order to achieve a new result, we must do things differently.” Thankfully, the quality of training provided was better the second time around and it started to show in the performance of the team member.

When things are off track in a team, it is usually improving the little things, that may seem insignificant, that will make all the difference. Once team members start seeing small but consistent improvements, their focus will start to shift from looking at what’s not going well to what’s now being done to make the team better.

Here are a few things that can be done to improve a team that is not performing well, both from a leader or manager’s perspective, and from a team member’s perspective.

If You’re The Leader or Manager

If You’re A Team Member

The dynamics of a team is so critical to the overall success of the team. When things are not going well in a team, it requires a recommitment to the fundamental values that make up a healthy, high-performing team. The ideas above, if applied, will eliminate frustration and get a team back on track and performing at a level they should be.

Action Step: If you’re in a team or a leader of a team, choose one thing from the lists above and apply it to make a positive contribution to your team this week.