Whenever we have an experience we deem to be a failure, it can hurt our identity in a major way. While we may intellectually know that experiencing failure is a part of life, we still experience negative emotions when things don’t go as planned or work out as we expected.

The truth is failure is just a perception. It is our perspective on what happened or what should have happened that dictates what we consider a failure or success.

If we don’t shift our perception around what we deem to be a failure, it can:

The good news is we can make each failure a valuable learning opportunity. 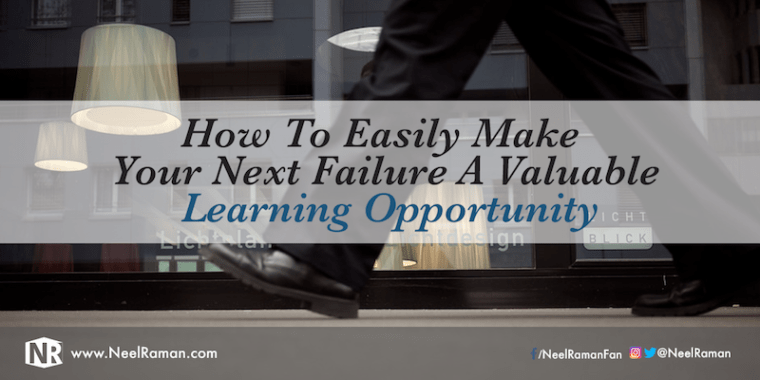 I recently had a conversation with the manager of a training team of a large global organisation after he had to make a difficult decision to reduce the size of his team by two. While it was not surprising that such a decision needed to be made because of how the organisation was performing, it was still a decision that had caused him a lot of angst and stress.

During our conversation, he revealed that he felt like he had failed. As he had been trying for a couple of years to get funding from other regions within the organisation to support training, that had not eventuated. As a result, he had been scrambling to do all he could to protect his team, but was unable to because he was forced to make a difficult decision.

Instead of acknowledging all the successes he had made over the years, he chose to focus on the immediate situation he found himself in, which he associated as a personal failure. That resulted in generating high levels of stress, not just for himself, but also for the rest of the members of his team, plus it affected his motivation levels and his perception of what could be possible for his team in the future.

Action Step: Reflect back at your last failure and ask yourself, “What did I learn from that experience and how will it help me to get to where I want to be?”

Question: What is another way we can make a failure a valuable learning opportunity?