Whenever we’re in a situation that is unpleasant due to someone being difficult or uncooperative, it can trigger a number of emotions.

These emotions can include anger, resentment, discomfort, fear, embarrassment or disappointment.

While it can be easy to let others affect our emotional state, if we have adequate tools to deal with difficult people or situations, we’ll have a much better chance of managing our emotions appropriately.

Since we interact with people all the time, knowing what to do or what to say whenever we’re dealing with someone difficult, will allow us to focus on what we need to do without getting caught up in the other person’s drama.

In my previous manufacturing career, the company I worked for had a sales manager who would get angry whenever there were delays with customer orders. It didn’t matter if there were valid reasons for delays such unexpected machinery breakdown, or if there were traffic delays on the road while delivering products to customers.

This sales manager had a reputation of being difficult to reason with and he wasn’t the most approachable person in the company.

On one occasion, there was a delay with delivery to a major customer and resulted in the customer giving him a call to find out why their delivery was delayed. The sales manager called the delivery manager at the time to find out what was going on. 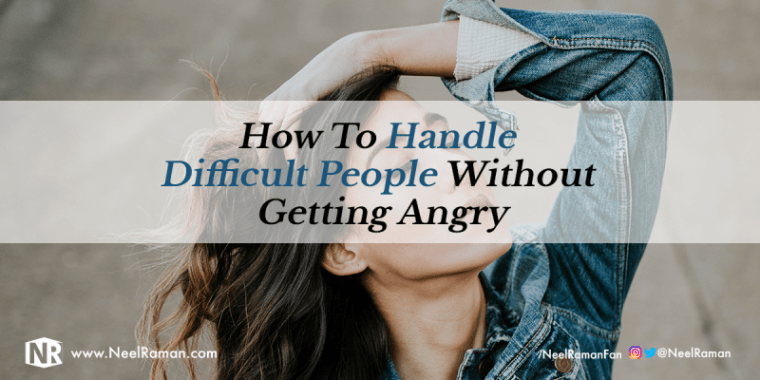 That abusive phone call lasted around five minutes and after he hung up, the delivery manager informed the site manager what had happened.

A formal complaint was initiated, which led to a full investigation of the incident. It eventually led to a third party mediator being hired by the company to reach an acceptable resolution. The delivery manager was acknowledged for how he handled himself and the situation, without escalating it any further.

The sales manager was given a disciplinary warning and was told a repeat of a similar incident would result in his termination from the company. He apologised for his behaviour. The remainder of the time I was at the company, I did not witness another incident like that again.

5 Things You Can Do When Dealing With a Difficult Person

Action Step: Reflect on the last time you dealt with a difficult person. What do you think you would do differently now that you have more awareness around what you can do? Start applying these ideas whenever you’re in an unpleasant situation with someone.

Question: What are other things we can do to handle difficult people without getting angry?