How to Know if You Will Achieve More in Life

One of the great things about us is that we’re programmed for growth, which means we all want to be, do and have more in life.

In the book, The Science of Getting Rich, in the chapter on Increasing Life, Wallace Wattles writes, “Every living thing must continually seek for the enlargement of its life because life—in the mere act of living—must increase itself.”

There is a law of the universe which states we’re either in a state of growth or decline. If we’re not growing, meaning if we’re not actively seeking to be, do or have more in life, it means we’re dying.

For us, dying means accepting or creating the same reality repeatedly, or not making progress in life. If we speak to a person, most times we’ll be able to tell if they’re growing as a person or whether they’re content to be where they are in life, which is just another way of saying they’re in a state of decline.

By achieving more, we’ll be able to: 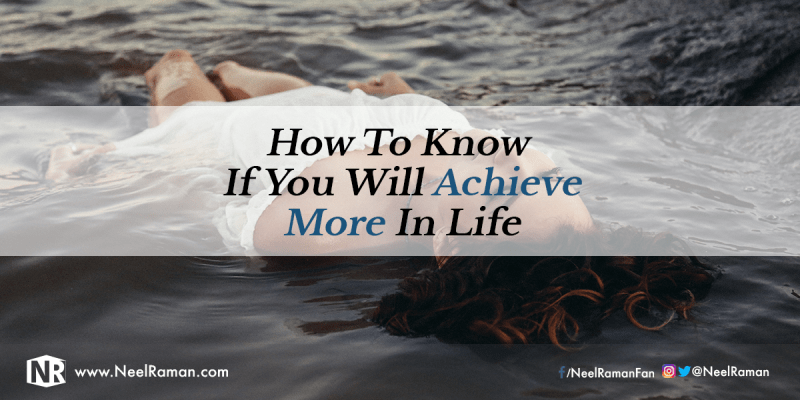 Key to success in life

In the late 1800s and early 1900s, Andrew Carniege, a Scottish-American Industrialist, was one of the richest people in the world, having made his wealth in the steel industry. He is quoted as saying he spent the first half of his life earning as much money as he could and he spent the second half of his life giving it away.

He was an example of the good that can come from achieving more in life because his legacy still lives on today, almost a hundred years after he passed away.

5 Things That Indicate You Will Achieve More In Life

If we continue to believe in our ability to achieve more and back it up with the right mindset, strategies and tactics, more success in life is possible for us, which means we’ll also achieve more. If we can accept that achieving more in life is actually a good thing, it’s more likely we’ll want to achieve more.

Action Step: Choose one area, whether that’s in your professional or personal life, that you would like to achieve more and reach out to someone for advice or guidance as to what steps you can take to achieve it.

Question: What is another way to know if we’ll achieve more in life?