Being a fan of NBA Basketball, I found Phil Jackson’s book, Eleven Rings: The Soul of Success, extremely insightful and full of leadership lessons.

Phil Jackson is the most successful coach in American professional sports, having won six Championship rings with the Chicago Bulls and five with the Los Angeles Lakers, for a total of eleven rings. 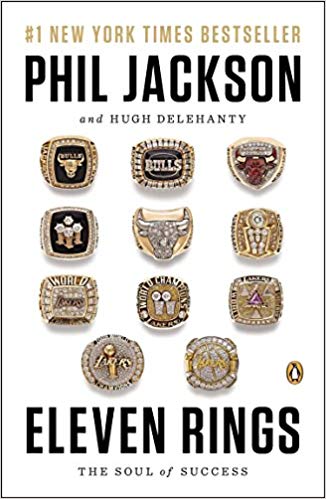 Jackson shares eleven leadership lessons early in the book, one for each ring, in what he describes as principles of mindful leadership. Here is a summary of those principles.

1. Lead From The Inside Out
The outside-in strategy can work but it will only work for a short period of time. Whenever you speak from your heart, the more you relate to people and the more people will hear you and follow you.

2. Bench The Ego
“My way of the highway” type of leadership very rarely works in sports or in business. As a leader, do not insist on having the last word. Instead, foster an environment in which everyone plays a leadership role.

3. Let Each Player Discover His Own Destiny
You cannot force your will on people. If you want them to act differently, you need to inspire them to change themselves.

4. The Road To Freedom Is A Beautiful System
Having a system for people to follow is extremely important as it empower others, and offers each person a vital role to play within that system. This allows people to move together and respond according to what is going on within that system.

5. Turn The Mundane Into The Sacred
As a leader, you role is to bring individuals together and connect them to something greater than themselves. The essence of being a leader or a coach is to get players to wholeheartedly agree to being coached, then offer them a sense of their destiny as a team.

6. One Breath = One Mind
Distractions can make or break any team. Each person must have a way to quieten the chatter in their minds and focus on the task at hand. Meditation is one of the most powerful ways to quieten the mind, what Phil Jackson referred to as “mindfulness meditation.”

7. The Key To Success Is Compassion
Phil refers to a teaching of Lao-tzu’s approach to leadership which was based around three things: simplicity, patience and compassion. Compassion is the key to breaking down barriers among people. As a professional, it is important to learn to open your heart so that you can collaborate with others in a meaningful way.

8. Keep Your Eye On The Spirit, Not On The Scoreboard
A team will be at their best when each of its members surrenders his or her self-interest for the greater goos of the team. As an example, a player who plays within his natural abilities, activates a higher potential for the team that transcends his own limitations, and helps his teammates transcend theirs.

9. Sometimes You Have To Pull Out The Big Stick
Phil refers to a Zen practice in which a flat wooden stick,called a keisaku, is used to get listless meditators to pay attention. It was not intended as punishment but to reinvigorate the meditator and make him or her more awake in the moment.

10. When In Doubt, Do Nothing
There are occasions when the best solution is to do absolutely nothing. Sometimes, focusing on something other than the business at hand can be the most effective way to solve complex problems. When the mind is allow to relax, inspiration often follows.

11. Forget The Ring
Being fixated on winning (or more likely, not losing) is counterproductive, especially when it causes you to lose control of your emotions. Obsessing about winning is a loser’s game. The most we can hope for is to create the best possible conditions for success, then let go of the outcome. It is better to focus on the journey rather than the goal. When you do that, success will take care of itself.

Eleven Rings: The Soul of Success is full of leadership and team performance lessons that can be applied not just to sports, but also in other leadership situations like at work, in business and even at home with your family.

Question: Which lessons mentioned here resonates with you and why? What other leadership lessons have you found to work well for you?