Words You Must Avoid if You Want to Be More Confident

The words we use has a huge impact on how we feel and what we experience daily.

As a result of our early programming and the external environments we’re exposed to, most people know and use more negative words instead of positive words.

It’s a matter of perspective whether using positive words is better than using negative words and the context in which they’re used, however it’s useful to know the effect the words we use are having on us and those we interact with.

Certain words we use regularly may cause us to have low confidence, therefore it’s valuable to know what they are so we can consciously choose to use more empowering words.

Many years ago in my manufacturing career, I had just started a new role as a site manager for a company. During the first two months, I was trying to find my feet and better understand the way things operated. 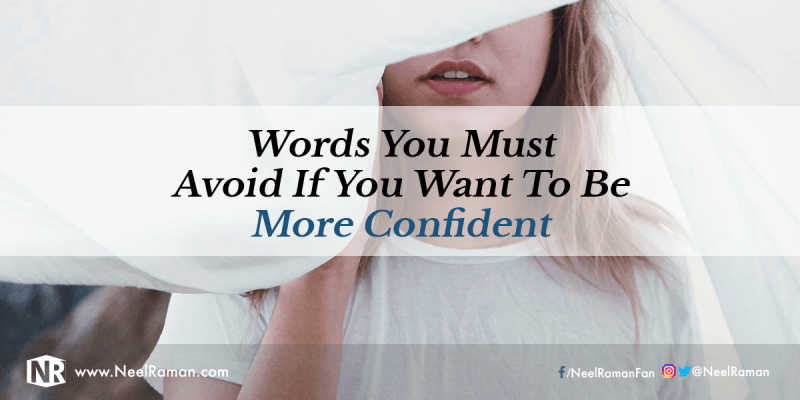 Words people who lack confidence use

My manager at the time was based at a different location and would regularly check in with me to see how I was settling in. As the weeks went by, he’d ask me questions related to specific products or customers and I would use the words “I’m not sure” and “I don’t know” frequently in my response.

At first, he didn’t challenge me to have better answers but as time went by, I even noticed myself using “I’m not sure” and “I don’t know” quite a lot which conveyed my level of confidence in my role.

During one conversation, after I had given my usual response, my manager asked me, “If you don’t know, then who would know?” I didn’t have a response so I said I would find out and get back to him. Following that conversation, I took it upon myself to be more proactive and find out answers and report back to him first before I was asked.

As time went, by, changing the words I was using increased my level of confidence in my ability to do my job well. Had I kept using the same words, I may not have been in that role much longer.

Words have power and we have to be more aware of the words we are using daily.

10 Words That Indicate You May Have Low Self-Confidence

If we are more conscious of the words we use and use positive and empowering words more often, our level of self-confidence will improve. As we use better words, we’ll notice a difference in our emotional state and our willingness to take new actions to achieve the outcomes we want.

Action Step: Pay more attention to the words you are using in your daily conversations over the next week. As you reflect on your words, think of new words you can use in place of words that may be dis-empowering and unproductive.

Question: What are other words that indicate someone may have a low level of confidence?